Posted on March 23, 2020 by George Walker. Filed within Uncategorized. 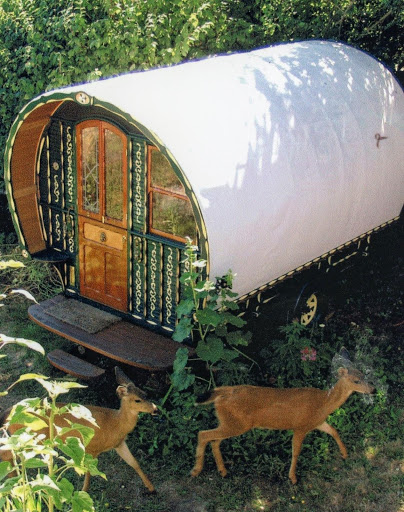 What follows is Jim Tolpin’s introduction from the PDF on building Gypsy wagons or Caravans. You can purchase the entire document from our shop page.

Why I Create Caravans

The first answer that comes to mind, which is probably the one closest to the truth, is the opposite of what mountaineers say when asked why they climb a mountain: “Because it’s there”. In my case, I’ve always wanted to build gypsy caravans because they are not there! (At least nowhere near me). I have long been fascinated with the traveling lifestyle, with life lived mostly outdoors, lived close to the edge—A life I lived for a decade or so in my youth. I learned that if you could live such a life in company with a cozy and enchanting conveyance in the form of a highly developed folk craft, then so much the better.

An encampment of gypsies with caravans by Vincent Van Gogh

For me, that conveyance was the English or Irish gypsy caravan (“Vardo” in the Romany language) as observed and painted by Van Gogh. Ever since having first seen this painting, and later highly romanticized illustrations of them in children’s books (see “Wind in the Willows” for starters) I began finding murky black and white photos of them taken at the end of the 19th century. I finally got my hands on a clutch of glorious color photos of restored versions at Appleby Faire in England as well as some highly detailed drawings by John Thomson. At that point I knew I had to have one. I also knew that the only way I would ever get my hands on one would be to build one.

Starting in the late 1970’s I built, and traveled in, a very simple version affixed to the frame of a 1940 Ford 1-ton pickup.

After moving to the Northwest, I embarked on building more authentically designed and detailed vardos, such as this hardtop version pictured above.

My last caravan was the “Trillium” completed in 2007. This wagon closely reproduced the look of a “bow top” style caravan that was produced by Bill Wright’s carriage shop in Leeds, England in the late 19th century.

Like most of my other wagons, I built the Trillium in collaboration with several other artists: a metal worker for the welded steel frame and some of the decorative brackets; a graphic artist for the panel art and lining out; and a stained glass maker for the windows. The current owner provided much of the fabric work of the interior decor.

The materials throughout this and all my other wagons (since my first) are marine grade. In general I used Honduras mahogany for the framework (mostly pinned tenon and bridle joints); Port Orford cedar for the tongue and groove siding; Sitka spruce for roof framing; Egyptian canvas sailcloth for the cover; marine grade oil enamel paints and bedding compounds; bronze and stainless steel fasteners and copper rove and rivets. Joinery throughout, including the interior fittings, were built to traditional joiner’s standards. That is, all the joints are mechanically interlocked and therefore don’t rely on glue or fasteners to bear loads.

None of my wagons were designed to be horse-drawn. I don’t know horses, and I don’t know how I would convince the beast to pull my wagon around the highways and byways of America. But I do know how to pull trailers behind my pickup truck, so I built my wagons to be roadworthy at highway speeds.

Of course, one can use far less expensive materials and still create a lovely caravan–it just will require more conscientious maintenance and even then may not enjoy a lifetime of use.

Whether traveling four or four hundred miles a day these wagons are the conveyances of dreams-come-true. They are a folk-craft of the hand that takes the heart home.